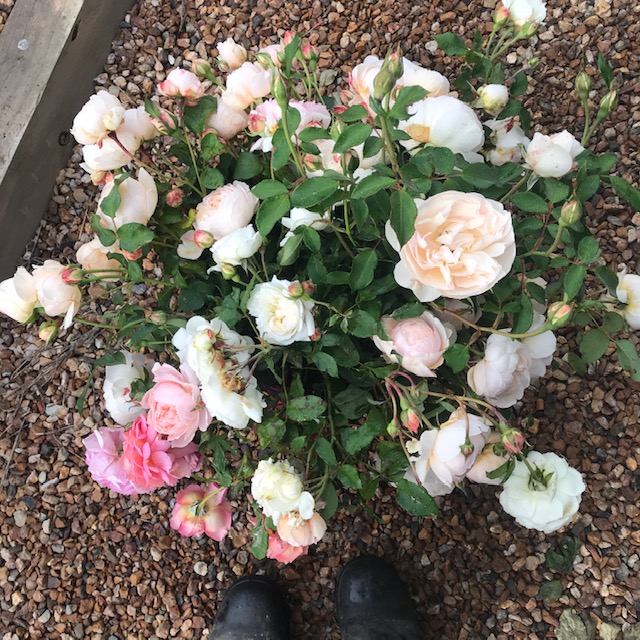 The Garden Chronicles – May

May is our last month for cut flower production before we finish harvesting for the season. It’s always sad to come to the end, and as soon as the flowers finish we miss them! The mild autumn meant the roses put on a lovely final flush. We have about 200 roses – a tiny amount of plants for a flower farm – but enough for us! I do love them but they require a constant eye and are actually one of our least profitable crops for the space they take up. But these are not your ordinary floristry roses – these are lush, fragrant, blowsy wonders that have people exclaiming in delight. We put them in due to the constant requests from wedding florists who love them so, and so we have primarily whites and soft pinks.

But when my local flower customers discovered the roses they kept asking for them too, despite my concern that they would only last a few days in the vase. But for such beauty and fragrance we don’t mind, they said, and since that is EXACTLY the kind of attitude I’m happy to support, I’m going to try to make these roses available for everyone next season! Pic on right is gomphrena/globe amaranth. It is one of the few other flowers still going strong in May, and I’ve enjoyed growing it for the first time this season. Everyone said it was a pain to pick, but i didn’t mind too much, and I’m going to try alllll the colours next season.

Whether it’s been field planning in front of the evening fire (pic on left), or writing columns at a cafe while on the road (on right), my computer has also been my faithful companion over the past month. So much computer work! First up was crop planning for next season. Everyone else seems to do this is winter?! But my methods of growing means that my fields are fully planted out with new crops during autumn and winter, instead of waiting till the following spring. So seeds and plants need to be ordered and started without even taking a breath after summer, and before that happens I need to have my fields planned out for the next season. I’ll do a separate post on crops chosen, it’ll be our fourth season and I’m honing what we grow every year, while trying out growing new things. For the first time I’m sticking strictly to a plan of what goes where, now I know through experience about how long everything takes. Most beds will have two crops, some will have three. It’s proven satisfying so far knowing exactly where things are to be planted, instead of just where I feel like it on the day, but it takes an enormous amount of will power to stick to the plan, and not grow things which aren’t in it! Im already planning the changes for the 2020/2021 growing season!

Other computer work has involved updating our website with new text and photos and ironing out some glitches. I’ve set up a new accounting system and loving the ease of use (hello xero!). I’ve been working on our online product plans, and started with our bulb offerings – specialty anemone corms, and tulip bulbs. Thanks to everyone who has purchased these! We’re getting ready to launch our seed range, starting with all my favourite cut flower varieties.

If the evenings have been for computer work, the days have been for pulling out the old crops and planting the new. It’s the time of year where I don’t want anyone to visit, transitions are not that pretty! Slowly but surely we are getting the crops in. I’ve also been putting some time into my poor neglected vegetable garden. I’m determined that this year we are going to have a great vegetable garden. I lost my cooking enthusiasm in a big way this past year, and I think part of the issue was that I didn’t have a vegetable garden to inspire me. A gift of some seed garlic was perfect timing (thanks Celine!), and I’ve loved seeing it start to grow. I’ve also put in lots of brassicas, lettuce, shallots, spring onions and beetroot. I’m keen to put up some low tunnels to grow some coriander and get some snow peas in too. With our mild climate we can keep a full vegetable garden growing through winter. Not having to worry about watering means that it’s actually a much easier time to maintain a vege garden than through summer. No tomatoes though!

That’s a big photo for a wheelbarrow load of brown stuff! But I figure it deserves it because that is a full load of vermicast. Thats what the worms leave behind in a worm farm, and it is stacked full of nutrients and microbes. It’s like the most concentrated form of compost and is incredibly good for your soil and plants. I’ve been motivated to get my worm baths up and running again (although the worms themselves would probably like to wait till it gets a bit warmer, my timing was a bit off there!). This load is destined to be added to our seed raising and potting mix to give our little plants the best start in life. Another winters evening project is too investigate worm farming on a slightly larger scale.

That about sums up our May. Bring on June and Winter Solstice!