Working on my Soil Legacy

This article originally appeared in the Waiheke Weekender.

One of the advantages of having members of the younger smartphone generation in your household is that you have a window into popular online trends. Actually most trends still manage to float on by me while I obliviously spend my time gardening, however a recent one caught my attention. This was an app called ‘Would you Rather’ with a simple concept, and based on a version of a party game which has been around for a while. The app poses an endless supply of options which you choose between. For example – would you rather be twice your weight or half your height? It’s a positive example of smartphone use which has encouraged some fun and interesting family conversations.

Pondering this app and the discussions it caused (would you rather lose an eye or a limb?), led me to thinking about soil. For me everything comes back to gardening eventually. I started with thinking about natural resources, and which of these we should focus on looking after first. Would you rather healthy water or healthy air? Eventually I settled on healthy soil as my highest priority.

Soil is one of most precious resources we have. Soil is made up of broken down rocks and dead plants and animals, with spaces for air and water. It is also home to an unimaginable number of living organisms. This basic mix is simple yet incredibly complex. Just a teaspoon of good garden soil can contain over a billion bacteria. A billion! It’s hard for huge clumsy humans to comprehend the sophisticated nature of the interactions that must occur in a teaspoon of soil, with not only this amount of bacteria present, but also fungi and many other larger soil organisms.

The health of our soil is not something that most of us pay daily attention to. We should, for that is where our food comes from. Even without knowing any soil science, it seems like an obvious connection that if our soil is lacking essential nutrients, then our food is lacking too. There is also fascinating reading on the potential links between healthy bacteria in the soil and how this is connected to healthy bacteria in our bodies.

When the children were small we spent a fair amount of time in the garden together. One of the things I consciously did was to stop myself referring to the soil as ‘dirt’. I wanted them to learn that soil was precious, and not something that is seen as a negative, like ‘dirt’ often is.

Our other valuable natural resources often come in for far more attention than soil, especially when people become concerned about quality issues. Poor quality water you can often taste, especially if you are used to water in it’s raw unadulterated form like we are luckily enough to have on this island. Poor air quality can be immediately obvious too. One of my university lecturers favourite sayings was “the only reason Auckland is unpolluted is because it is so windy and rains so much”. They obviously didn’t live on Waiheke, where we sometimes have the unique perspective of a brown haze settled over the city skyline as we commute on the ferry. 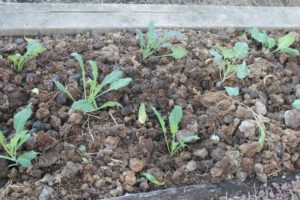 So why be concerned about soil? In the absence of a proper investigative approach, a quick online search throws up Professor John Crawford from the University of Sydney writing for Time magazine. According to the Professor, at the current rates of soil destruction, we have about 60 years of topsoil left. 60 years! I don’t think he actually means that soil in your garden is going to just disappear, but rather that the majority of the soil used to mass produce the main food crops in the world, will simply have become so degraded that they will be unable to provide any fertility to grow these crops. In his opinion, the simple fact is that we take too much from the soil and don’t put it back. Even though technically soil should be a renewable resource, we’re basically mining it at such a fast rate that natural replenishment is not possible. It’s a topic that can rapidly become complex, but the fact remains that looking after our soils should be of utmost importance for everyone. With soil we simply have to think long term.

In my ideal world, soil health would be of utmost importance. A soil test would considered as important as a building report when buying property. And a soil test result that showed that the previous owners has carefully nurtured the soil, increasing it’s organic matter, looking after all the soil life, and working hard to maintain a balanced amount of minerals would be valued. Such a result would add thousands to the value of the property.

Or you may consider improving your soil health a worthwhile legacy for future generations. When I was young and idealistic I was sure I was going to do some great (but unspecified) aid work in some less fortunate country Now, I think I will be happy to have worked hard on improving the soil that I am responsible for in my lifetime. A lasting healthy soil legacy is one that I can be proud of. If you are wondering who the crazy person is picking up copious amounts of washed up seaweed from the beach, or horse manure from the paddock, it’s probably me. Just working on my soil legacy.

If this all gets a bit too much, you could always just play another game. Would you rather be a dragon or have a dragon? Or even better – would you rather help set the table before dinner or help clean up after dinner?